Two distinguished historians were guests on Wednesday December 1st at the Sybir Memorial Museum. Together with the director of the Museum, Wojciech Śleszyński, PhD, they had a debate about historical politics and remembrance about the Second World War in Russia and Belarus. 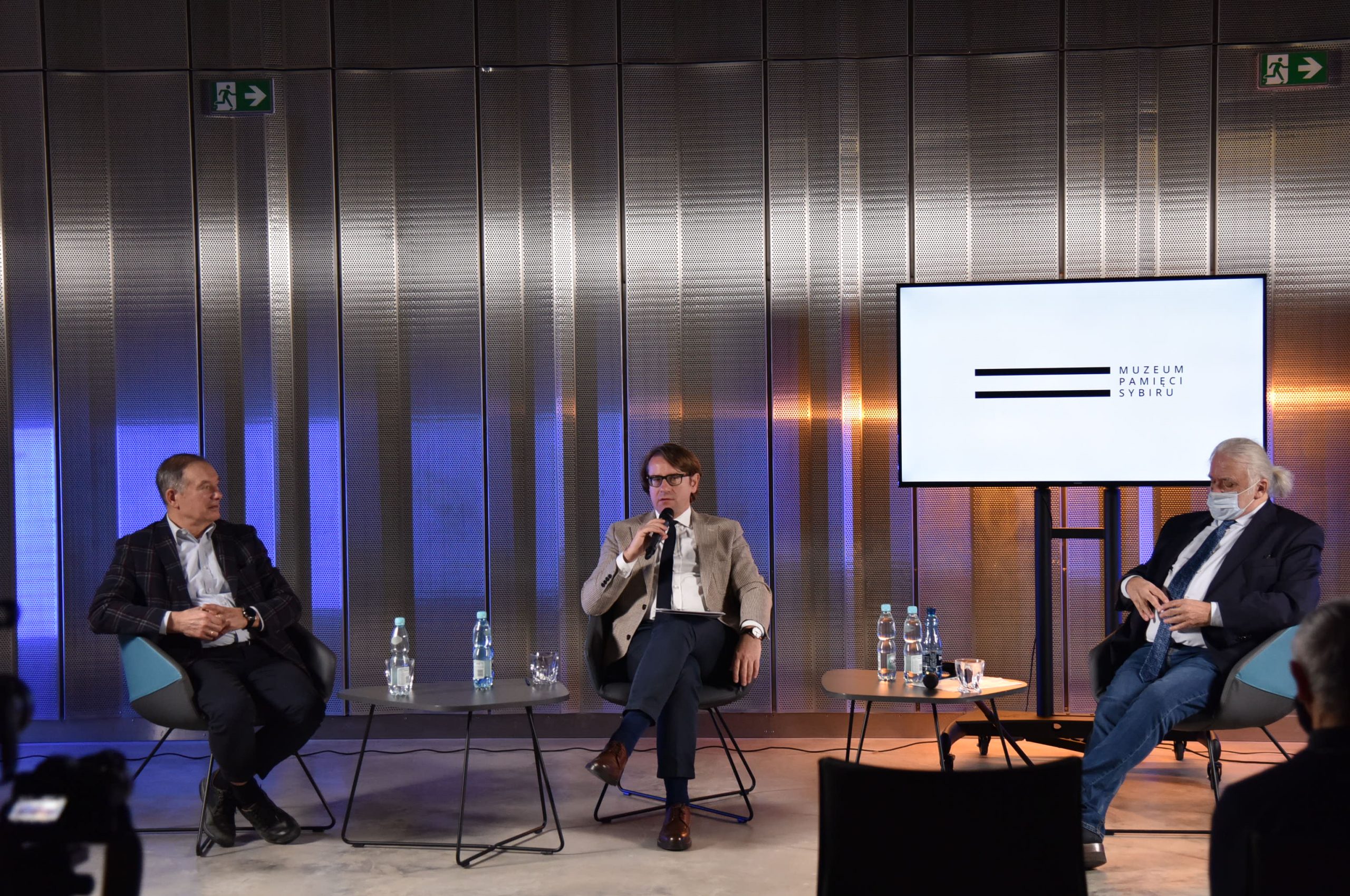 Mikołaj Iwanow, PhD, spoke about the Russian narration concerningWorld War II, effecting after 1945 about historical politics in modern Russia: — Russians do not use the phrase ‘World War II’, but ‘Great Patriotic War’ and for them it begun on June 1941 when the German attacked the Soviet Union.

Iwanow, Professor, reminded, that in Russia functions an agreement criminalizing statements putting into doubt the victory of the country: — The fact that the war was mainly a home war, millions fought on the German side, 200 thousands Ukrainians were on the German side during the Warsaw Uprising.

— It shouldn’t be mentioned that the war brought great destructions, millions of people died. Stalin lied saying that during the Great Patriotic War only 7 millions citizens died. Chruszczow spoke about 20 millions, historians counted the loses for 40 million. Today, the official version says about 27 million, including 10 million soldiers and 17 million civilians —  explained the historian.

— Meantime in Russia there are voices saying that not so much the Soviet Union won, but mostly Stalinism, the war brought the reinforcement of the totalitarian power — emphasized Iwanow, PhD.

Zdzisław Julian WInnicki, PhD, referred to the Belorussian historical politics: — It is based on three myths. The first one relates to the mutual fight of all the nations of the Soviet Union against fascism in the victorious Great Patriotic War. It strongly unites Belarusians with Russians, they live the myth of the anti-fascist coalition.

— The second myth says that Belarus was the most partisan country during the occupation, although the guerrillas were commanded by Moscow, these were Soviet, not Belarusian guerrillas, explained Professor Winnicki. — The third is based on the idea of merging Western Belarus with the Byelorussian SSR on September 17, 1939, that is the unification of the entire nation in one state.

— This myth really unites Belarusians: it is both a message of the Belarusian authorities and those who are unfavorable to that authority. This year, September 17 was declared a public holiday in Belarus. It is an element of historical policy that builds the Belarusian national identity — said the scientist.

How does it happen that heroes of one nation are thought by other nation to be criminals?

Ivanov, PhD, said: — Today in Russia it cannot be said that Stalin reached an agreement with Hitler, the Ribbentrop-Molotov pact is presented as ensuring the strengthening of borders. Contemporary Russian propaganda says that the Poles stabbed the Russians in the back as they heroically fought the fascists. Today, Russia is ruled by nationalism.

— It seems to me — said professor Ivanov — that today most Russians know what Katyn is. After the Smolensk catastrophe, the Russians were very moved, and Andrzej Wajda’s film was shown on Russian television, the researcher said. — But there is one more crime: in the Warsaw Uprising. Death of 200,000 people allowed by the Red Army. The Ribbentrop-Molotov pact seemed to revive for two months and some murdered while others watched. This is not said to be a crime in Russia — explained the historian.

Professor Winnicki recalled the treatment of Home Army soldiers who had so far lived in Belarus: — Despite our more than 20 years of efforts, Home Army soldiers are the only ones in Belarus who do not have veteran qualifications. Moreover, criminal investigations are being carried out against the ‘murderers of simple people’ and the soldiers of the Home Army are mentioned as suspects, because they ‘fought against the reunification of Belarus’.

The professor assesses this situation from the point of view of a political scientist: — For Belarusians, to recognize the Home Army as combatants is to admit that their fight was fair and that it was the Soviet occupation and not the unification of the state. They cannot recognize it because they would have to deny their own identity.

Is it possible to agree, to write a common history, since the same dates for us Poles are a symbol of a tragedy, and on the other side of the border they are celebrated?

Professor Ivanov believes that yes: — I believe that there comes a time when it will be possible to build the memory of the Second World War together. Maybe our grandchildren will write this common story, maybe their children…

Professor Winnicki has a different opinion: — A common history textbook will not be created. We have different visions of goals and heroism.

Wojciech Śleszyński, PhD, director of the Sybir Memorial Museum, summed up the discussion: — We scientists know that the most important thing is not that we agree, but that we talk. The worst thing is when we stop talking about history. Memory and history are essential to build the present and the future.

Mikołaj Iwanow, PhD, from the Institute of Political Sciences and Administration of the University of Opole is a political scientist, historian and Sovietologist. He specializes in researching the Soviet nationality policy and the Polish national minority in the East. His publications include the books: „Zapomniane ludobójstwo. Polacy w państwie Stalina. „Operacja Polska” 1937-1938” (‘Forgotten Genocide. Poles in the state of Stalin. ‘Polish Operation’ 1937-1938′), “Pierwszy naród ukarany: Polacy w Związku Radzieckim w latach 1921-1939” (‘The First Nation Punished: Poles in the Soviet Union in 1921—1939’ and “Powstanie Warszawskie Widziane z Moskwy” (‘The Warsaw Uprising Seen from Moscow’).

Zdzisław Julian Winnicki, PhD, from the Institute of International Studies at the University of Wroclaw is a political scientist and historian. He deals with the political system of modern Belarus, Polish-Belarusian relations and research on the Polish minority in Belarus and Lithuania. He published, inter alia, monographs “Współczesna doktryna i historiografia białoruska (po roku 1989) wobec Polski i polskości” (‘Contemporary Belarusian doctrine and historiography (after 1989) towards Poland and Polishness’) and “Rada Regencyjna Królestwa Polskiego i jej organy 1917-1918)” (‘Regency Council of the Kingdom of Poland and its organs (1917—1918)’), as well as “Szkice polsko-białoruskie” (‘Polish-Belarusian Sketches’).