Sybir Memorial Museum is a collective work of a generation of Sybiraks and their grandchildren who together tell the world a story about people thown by their fate into a vast depths which stretches between Ural mouintains and the Pacific Ocean; into the depths of human fall and nonhuman strenght of survival; somewhere between Siberia and Sybir. 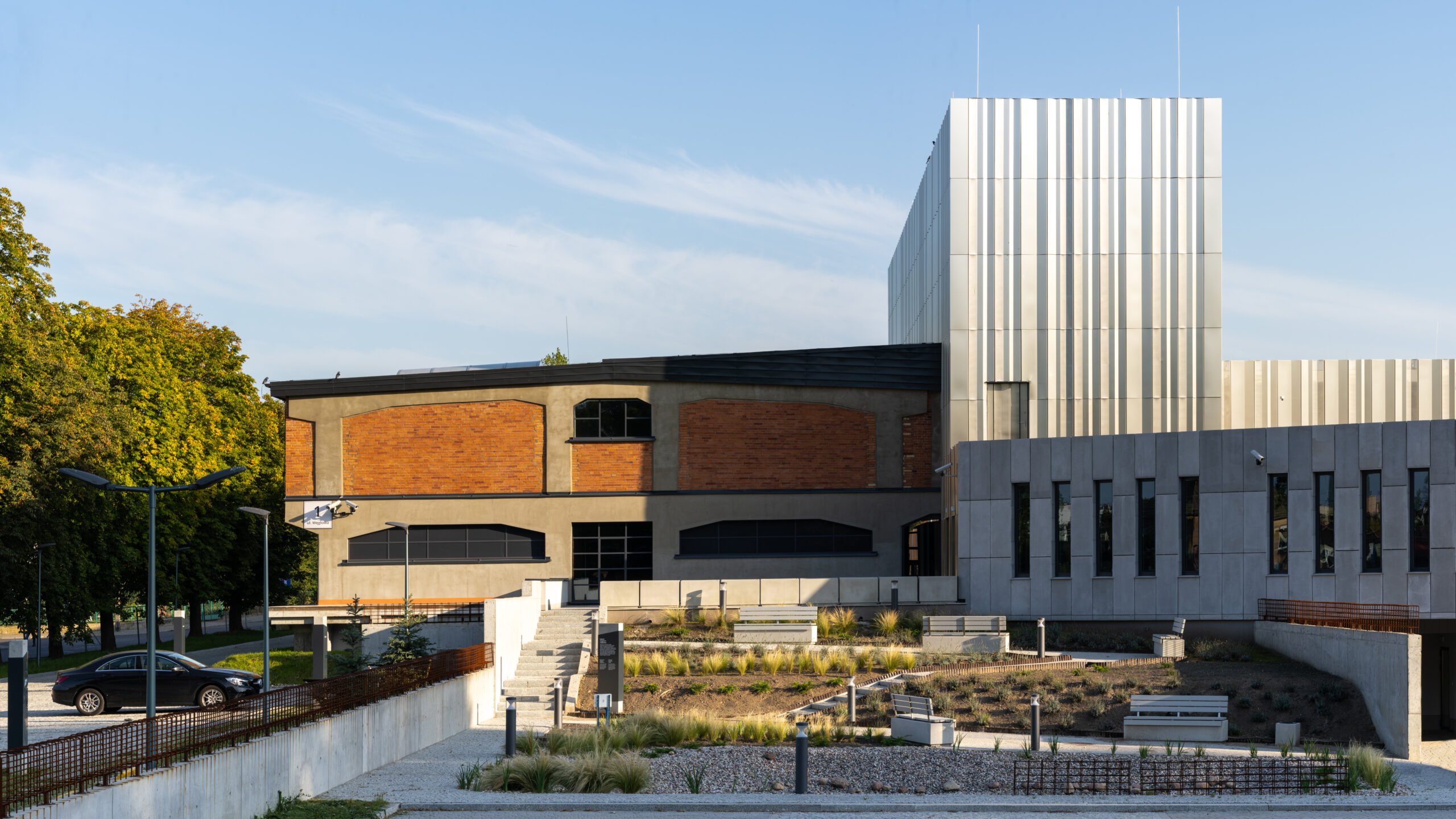 Although the Association of Siberian Deportees (Sybiraks) was formed in 1988, the commemoration of people deported and sent to Sybir, begun in Poland in the 1990s. The habitat of the historians, of Białystok, highly interested in the subject, was doing their best to spread the knowledge of ‘Polish Sybir’. In Bialystok, from the initiative of the Sybiraks, next to the Parish of Holy Spirit a monument was built – The Grave of An Unknown Sybirak, and at the bottom of the church the Memorial Chamber was made.

The city authorities intended the surrounding two-hectare area, with the former military warehouse from the 30s located at Weglowa Street to build the Sybir Memorial Museum.

Jan Kabac’s Arkon Designers completed the work on the Sybir Memorial Museum architectural design in a year. The concept assumed preservation of the original military warehouse intended for exhibition purposes, and the addition of a modern building which was to house conference and educational rooms, a library, a café, and administration offices. A building permit was obtained.

On 17 September, the Competition Jury chose the winner of the competition for the development of the spatial concept of the Sybir Memorial Museum permanent exhibition. Out of seven offers, the proposal of the Belgian studio, Tempora, was decided to be the best. In the design, the jury applauded its artistic values, logical arrangement of space, and distribution of individual exhibition stands.

In October, Bialystok signed an agreement with the Ministry of Culture and National Heritage to co-finance the construction of the Sybir Memorial Museum. That year, the preliminary stage of construction was successfully completed, consisting in the necessary demolition and installation works, preparing the area, and the warehouse building for the main construction works.

On 1 January, the Sybir Memorial Museum began operating as an independent institution. In the same year, we managed to develop a project under the heading of “Implementation of the Permanent Exhibition and Purchase of Equipment for the Sybir Memorial Museum”, as well as obtain funding for it from Priority Axis 8 – Protection of Cultural Heritage and Development of Cultural Resourses, implemented under the Infrastructure and Environment Operational Program 2014-2020, financed by the European Union.

The tender for the construction of the shell of the Museum building was won by Budimex S.A. The contract was signed in April, and construction work started. On 15 October, in the presence of the Sybiraks, their families, and other involved guests, the foundation act of the Sybir Memorial Museum was officially signed, blessed, and embedded in the foundations of the building. Inter alia, it expressed the belief that “This institution will cherish the memory of the victims and crimes which, in the Polish mind, changed the distant Siberia from a wonderful and rich land into cruel Sybir – the Inhuman Land”.

On 19 June, the contractor of the Museum’s core exhibition was announced. The tender was settled in favour of Deco-Bau who, immediately after signing the contract, began working on artistic installations, showcases, displays, multimedia, and other elements of the exhibition. A special competition jury also selected a design for the art installation to occupy the centre of the exhibition – the winning concept was Martyna Pająk’s. In August, the largest exhibit of the Museum was brought under the Museum’s roof – a Russian freight car built in 1892, the so-called tieplushka, which serves as the main entrance to the exhibition. In December, construction work was completed, and Tadeusz Truskolaski, the Mayor of the City of Bialystok, handed over the keys to the new building to Professor Wojciech Śleszyński, the director of the Sybir Moemorial Museum. The Sybir Memorial Museum has won the Top Investments 2019 competition.

It was a year of intensive work on the permanent exhibition and the furnishing of the entire facility. Showcases, lightning, audio-video devices were installed and, finally, exhibits were arranged in their places. Multimedia and systems supporting the flow of visitors, helping them to enjoy the exhibition, were developed (including catalogues, audio, and multimedia guides). #Zapamiętani [#The Remembered] project proved very popular, thanks to this initiative the Museum received photos of the Sybir survivors and their families from all over the world – they will be used in the hall at the end of the core exhibition. In Spetember, the Monument of the Sybirak Mother was unveiled, located at the entrance to the Museum. The authors of the monument are Katarzyna and Ryszard Piotrowski, and their design was selected in a competition. Another award granted to the Museum was a title of the Top Municipal Investment 2020.

The Sybir Memorial Museum opens its doors to visitors. It is the first museum in Poland devoted to the history of the Poles in Sybir – telling not only the stories of 20th century deportations, but also those of the 19th century exiles, and earlier tsarist repressions, as well as tales of voluntary settlement in Siberia, and the study of the land by Polish explorers. The mission of the Museum is to gather, develop and protect collections related to this subject, as well as to research and popularize the history of ‘Polish Sybir’ and the history of Eastern Borderlands of the Second Polish Republic.

The project “Implementation of the permanent exhibition and purchase of equipment for the Sybir Memorial Museum” is implemented under Measure 8.1 Protection of cultural heritage and development of cultural resources, the Infrastructure and Environment Operational Program 2014—2020.