Fashion show and the display of vintage bicycles

On Sunday, thanks to historical reconstructors, we turned back in time to the 1930s and 1940s. Interwar bicycles were placed in the hall of the Sybir Memorial Museum, and elegant figures in clothes of unusual cut appeared among the guests. 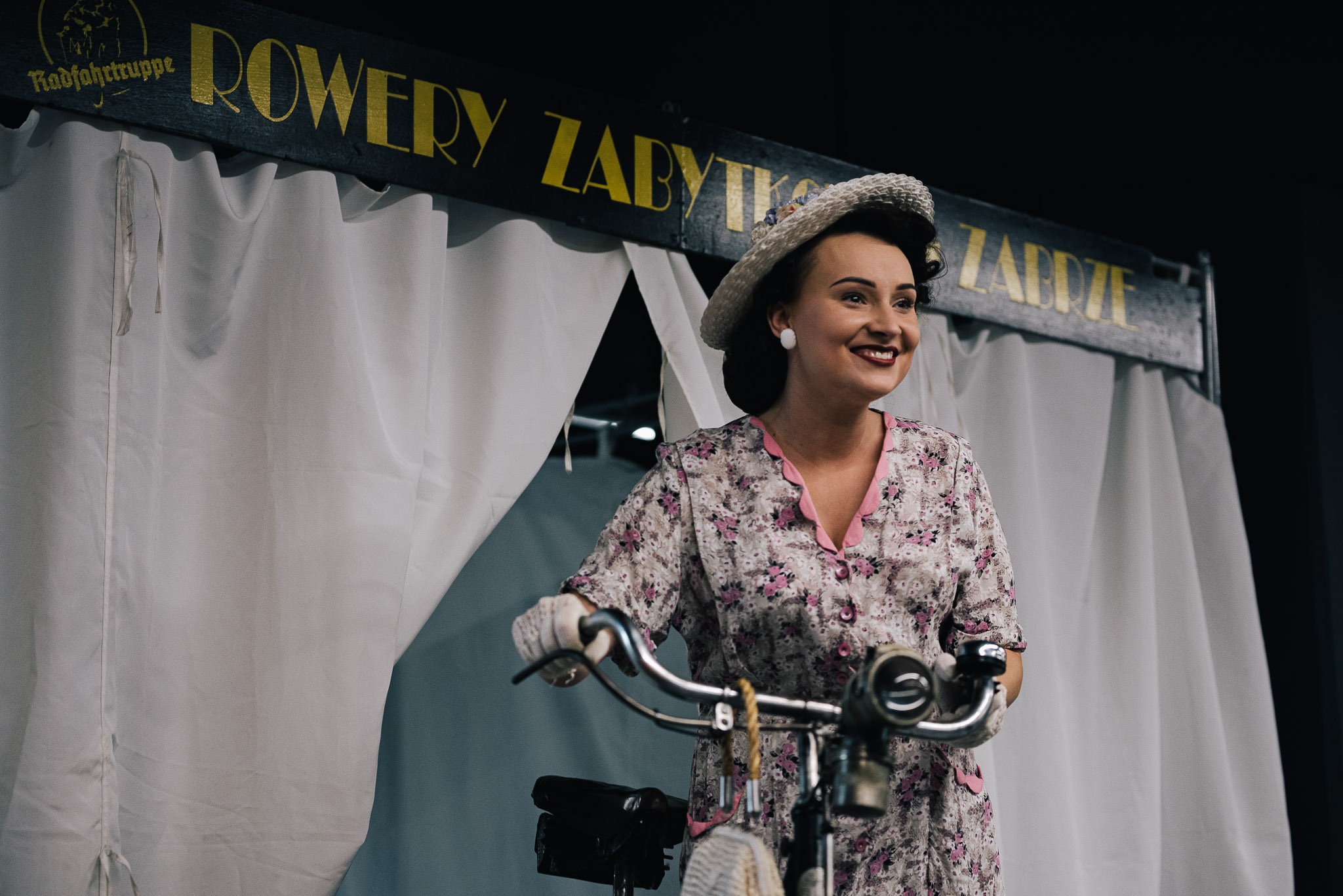 Among the exhibits brought by the members of the “Rowery Zabytkowe Zabrze” Association we could see several German-made vehicles, such as Stricker, Adler Herold, Sun-Heil, and Polish — such as “Polish Sports Bike” from the 1930s — Wooden hoops made it very light — explained Adam Wojtyczka from the Association. There was also “Łucznik” produced by the State Armament Factories.

The elegant red women’s bike of the Germania brand from 1936 was eye-catching. The rear wheel has a colorful mesh that protects the skirt from getting caught between the spokes of the bike.

— Some of the bikes have original tires — said Michał Cieślik, chairman of the Association.

The unusual bicycle with a bottle box in front of the handlebars was clearly visible. — It’s a transport bike — explained Cieślik. — We reconstructed it on the basis of an old frame, on the basis of a photo — shows an old photo of a shopkeeper Helmut Lipiński standing in front of a shop in Zabrze. There is such a bicycle in front of the shop window, with an advertising sign on the frame. — This seller was a local precursor of home delivery shopping, such a bicycle was used for this.

The variety of vehicles also made it possible to learn about… the history of bicycle lighting. — Here is a candle lamp, cushioned — the reenactors showed. — Here is a carbide one, including a kerosene bike, and here — in a Sun Heil vehicle, there is a dynamo and a battery-operated light with shock absorption. On the Patria bicycle, the bicycle lamp can be removed to serve as a flashlight. — This solution is used especially in military bicycles — said Adam Wojtyczka.

The collection of the “Rowery Zabytkowe Zabrze” Association began with military equipment. — We had old uniforms, but when other reconstruction groups become specialized in weapons, we decided to get a military bicycle. Over time, the Association become specialized in the reconstruction of the 1930s and 1940s with an emphasis on the realities of everyday life — said the president wearing an elegant gray suit. Are there original elements in his outfit? Yes, shoes, sock garters and a tie. — he was pointing.

— I am wearing an original set from the 1940s —- said Paulina Nowak. The fashion of that time required waist to be emphasized. Here we used an overskirt, which frames it. Magdalena Cieślik in an intensely blue suit — as she said, sewn on the basis of an original pattern — drew attention to details in her friends’ outfits: collars, puffs emphasizing the shoulder line, glass buttons. — My dress has plastic in it — laughed Karolina Michalik in patterned clothes — but I have original shoes and a handbag — she emphasized.

— We must remember that we are confused by black and white photographs from those years — pointed out one of the reconstructors. — The fashion of the 30s and 40s was colorful, although during the occupation there was indeed a lot of black color.

The richness of clothes, both for men and women, was additionally presented by the reenactors at a specially prepared fashion show.