Giving gifts by the Sybiraks from Warsaw

On October 28, the Museum was visited by the representatives of the Warsaw Branch of the Sybiraks’ Association. They donated a few souvenirs to the Museum’s collection. 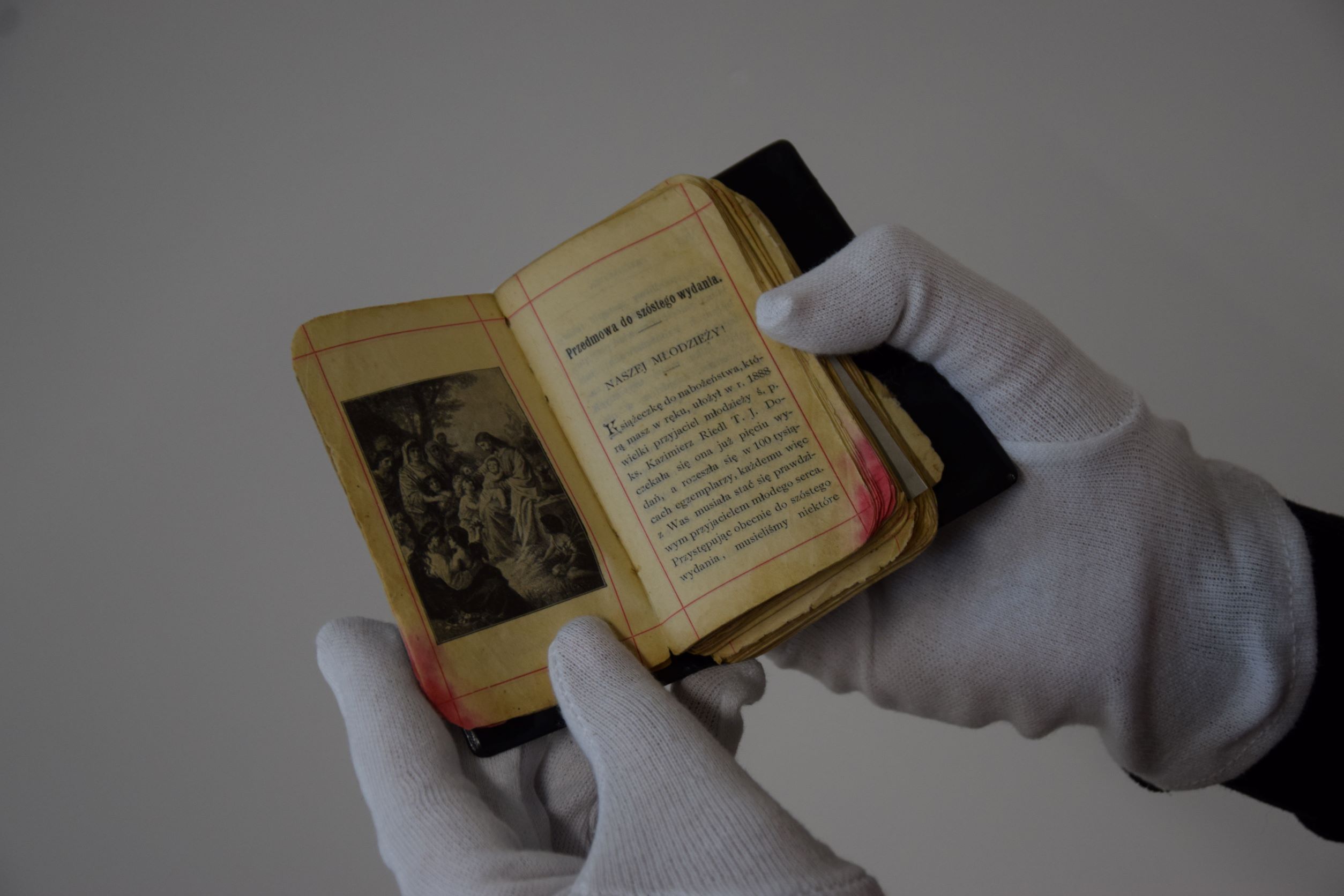 The group of nearly 40 people included both the recent guests of the opening ceremony and those who visited the Sybir Memorial Museum for the first time. “This museum is a tribute to you and your relatives, Sybiraks. It is supposed to speak especially to younger generations,” said the Museum’s director, Wojciech Śleszyński, PhD.

Representatives of the Sybiraks’ Association operating in Warsaw brought gifts for the Museum. The director was the first to receive the tiny prayer book from 1911, belonging to Maria Zdybek, born in 1904. She had it with her in the Komi Republic, where she was deported in 1940. She spent 6 years there. “She was the manager of the Polish Orphanage. She took 150 Polish and Jewish children from exile to Poland,” we read on the card attached to the souvenir, kept by Mrs Danuta Łunej from the Warsaw Ochota Association. Along with the booklet, the Museum received a picture made in 1941, showing Maria Zdybek with her daughter Cecylia and son Zdzisław.

The symbolic moment was handing over the flag that used to belong to the Sybirak Union Circle in Legionowo to the Sybir Memorial Museum. “Members of the circle have already passed away to eternity,” said the vice-chairman of the Warsaw Branch of the Sybiraks’ Association, Czesław Czarkowski. “There are less and less of us. Those of us who were deported as children are now 80, 90 years old. I also belong to them,” emphasized the Sybirak. “This banner, like all those that have been handed over to us so far, will be carefully kept,” assured the director of the Sybir Memorial Museum.

An additional object given to our facility by Mieczysław Koralewicz from the Warsaw Wola circle was a modern replica of paws, i.e. woven shoes. “We made these shoes from tree bark” — said the Sybirak who handed them.” As a replica, they cannot become a part of the collection, but they will be an excellent educational aid for children and young people during our museum lessons,” said Śleszyński, PhD.

The gifts given by Sybiraks and their families are an essential part of the Sybir Memorial Museum’s collection. “More and more people, in consultation with their families, decide to give us their souvenirs,” the director of the Museum told the audience. “We are extremely grateful for this, and emphasize that the decision is yours. We know how difficult it is to part with family mementos,” he admitted.

“In the Museum, all these items will be properly secured and survive for the next generations” assured the director. “We have the most modern conservation studio in this part of Poland, we carry out dry and wet conservation. At the exhibition, we have the specialized showcases that provide the appropriate temperature and humidity to the objects,” he said. “The biggest challenge is the acidified paper. Unsecured properly or treated with duct tape — it crumbles in your hands. You know the condition of the old documents that you keep at home ” — said the professor. The Sybiraks nodded at these words.

“The Sybir Memorial Museum provides professional care to all donated gifts,” said Katarzyna Śliwowska, head of the Collections Department, also present at the meeting with Sybiraks. “We create the best conditions thanks to which the objects will last for years to come. Scientists will be able to study and describe them. They will be able to find an exhibition, and over time all of them will be included in the public online catalog ” — explained the specialist.

After the meeting and donating the gifts, the guests went with the guides to the permanent exhibition. Memories were brought back to life, so some added comments and stories to the guide’s stories. Mrs. Barbara from Warsaw admitted after leaving the exhibition: “Amazing impressions. I will come here with my children and grandchildren”.