Every year the Sybir Memorial Museum awards people, who have showed special dedication to actions towards the most modern museum in Bialystok. On Friday, December 9, a Sybirak, Barbara Sokólska, a Sybirak and at the same time the Head of the Sybirak’s Association — Kordian Borejko and the Mayor of the City of Bialystok, Tadeusz Truskolaski officially joined the group of the Sybir Memorial Museum’s friends. 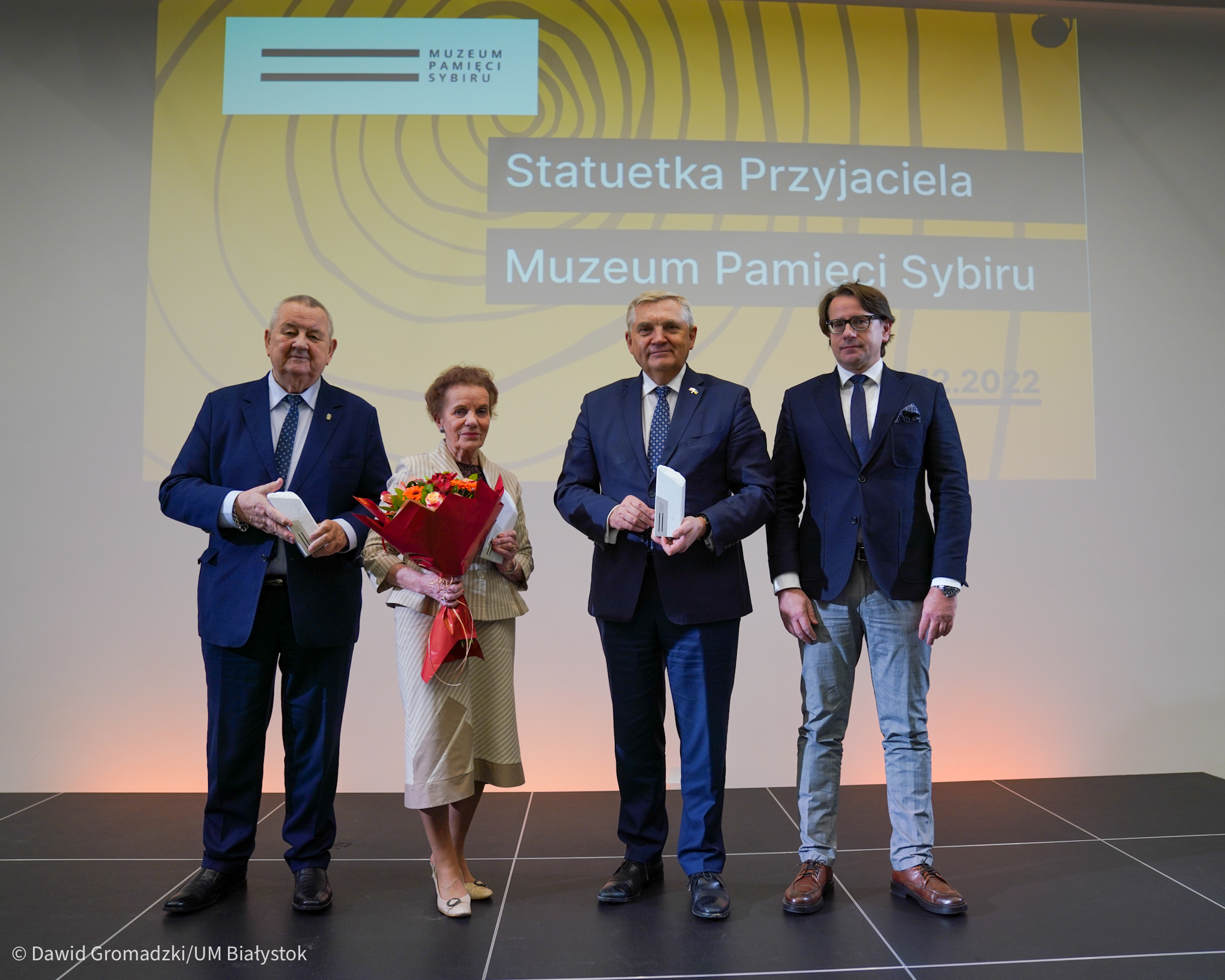 The statue granted to the Museum’s Friends is a marble block reminiscing of a block of ice or snow and evoking associations with Siberian cold. In 2022 the award was granted for the 4th time.

During the ceremony the merits of the awarded people were recalled. All three honored people were supporters of establishing of the museum in Bialystok, that would keep the memory of Polish exiles and deportees deep into Russia and then into the Soviet Union.

“She’s one of the most generous donors of the Museum in terms of the number of the donated memorabilia. They contribute today to the permanent exhibition — for example the vest. Mrs. Basia’s parents wrapped little Basia in it during the torturous way to Sybir. Mrs. Sokólska still cooperates with our museum, always offering advice and assistance” — it was said in the laudation in honor of the Sybirak, Barbara Sokólska.

Barbara Sokólska, née Młynarz, on April 13, 1940 at not even one month of age baby was deported by the Soviets to Kazakhstan. Her family returned to Poland in 1946.

Mrs. Sokólska is an active member of the Sybiraks’ Association. She takes part in patriotic ceremonies and exhibitions. She also meet together with teenagers, to whom she vividly and poignantly tells about about the drama of the soviet deportations from the perspective of a bystander of history. She gets millions of Poles closer to the fates of deportees, appearing in the regional and Polish media.

— My whole family house is in this museum, for example the flowers taken by my mother. I can’t go to Belarus to admire them, but they are here in the museum, where everything can be seen… — she spoke with great emotions.

Kordian Borejko was also awarded the title “The Museum’s Friend”. He has been working for the Sybiraks’ community since 2005, first in the Gdansk Branch of the Sybiraks’ Association and since 2014 he has served as the Chairman of the Main Board of the Association.

“Thanks to his actions and support such initiatives as the payment of reparations for Sybiraks, the continuation of publishing the pre-war magazine “Sybirak” and finally — opening of the Sybir Memorial Museum were succesful — it was said during the ceremony.

Kordian Borejko was deported to Kazakhstan on February 10, 1940, when he was only a seven months baby. His family spend 6 years and a half in exile.

During the day of the opening of the Sybir Memorial Museum on September 17, 2021 he reminded of mothers’ credit, thanks to which the youngest deportees to the “inhuman land” survived.

— I’m moved — said the Chairman of the Sybiraks’ Associaton. — I don’t feel I deserve this award as myself, Kordian Borejko. I think that this statue is intended for the whole living group of our Sybiraks. — he stated.

Among the meritorious people in 2022 was the Mayor of the City of Bialystok, Tadeusz Truskolaski, whose merits for our region, city and the Sybir Memorial Museum were mentioned during the ceremony. Since the beginning, he was in favor of building the Sybir Memorial Museum. He emphasized, that as a city painfully touched by the soviet repressions, it is our duty to keep the heritage of the former Borderland and the memory of its destruction. The museum was established mainly thanks to his support and efforts to provide funds for the implementation of this project” — said the justification. — Without his support the institution could not have been made — the director of the Sybir Memorial Museum, Wojciech Śleszyński said about the Mayor of the City of Bialystok.

— That’s true, I won’t deny these words — said in gratitude for the award the Mayor of the City of Bialystok, Tadeusz Truskolaski — but the idea itself [of building the museum] was circulating in the air, the Siberian idea was very lively and gathered thousands of people in Bialystok. It was natural to find a permanent place for it. We wanted to do it right: by international contests, so the museum has the highest level. That’s why it took us 11 years. The museum receives only the words of praise — admitted the Mayor of the City of Bialystok.

— I’m moved and thankful, but I’d like to stress that the merits are not only my, I mostly ran and run the wonderful team wedded to the museum and the Sybiraks’ matters. – said professor Śleszyński.

The ceremony on the occasion of the Friend’s Day of the Sybir Memorial Museum ended up with the musical performance by Maestro Chives, so Marcin Roszkowski, a fiddler.