On Friday November 19, Janina Rutkowska, Renata Frankowska and Krzysztof Koptyński were awarded the Statue of the Sybir Memorial Museum’s Friends. The ceremony was graced by the classical violin and organ concerto. 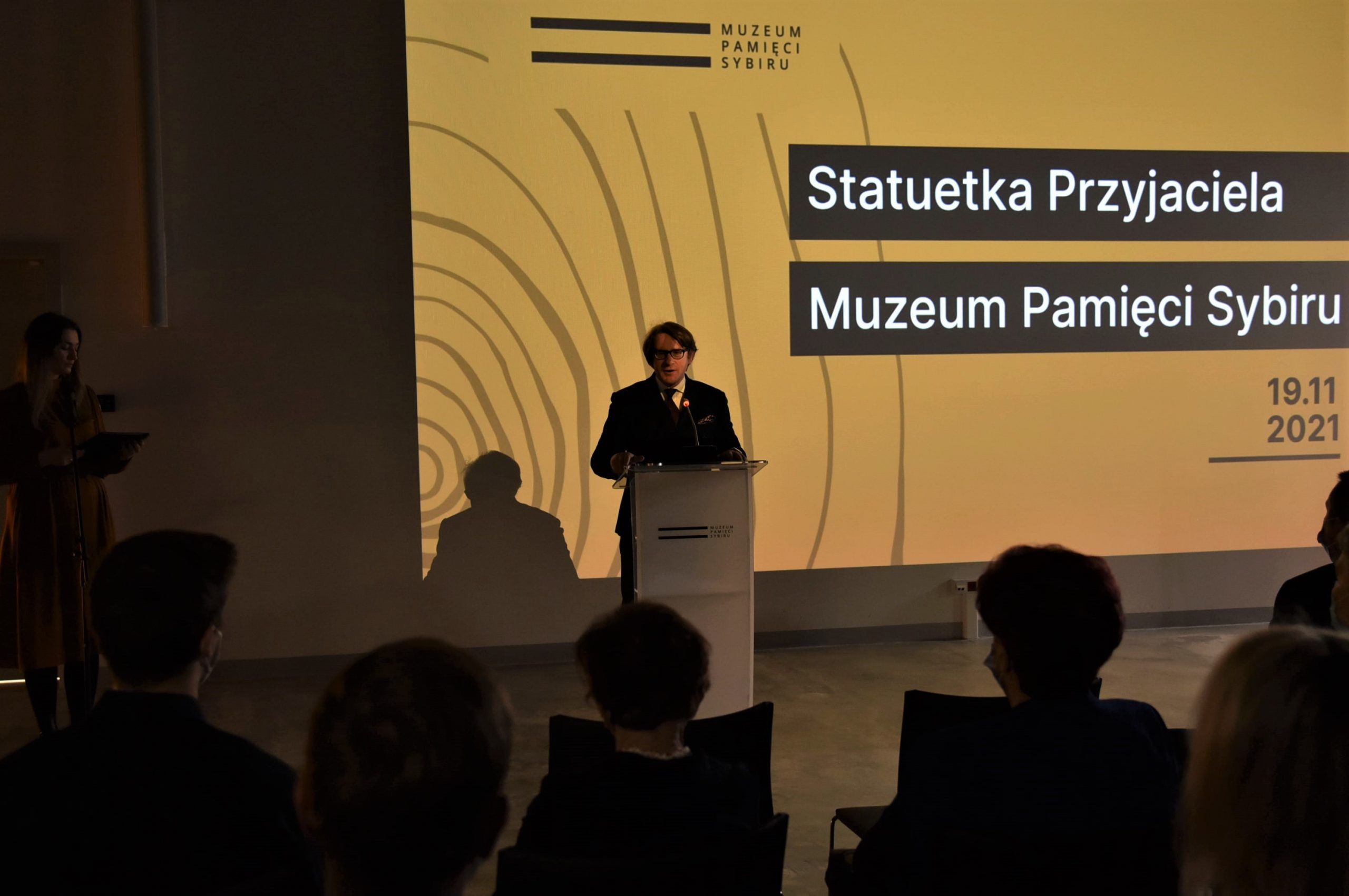 The first snow-white marble statuette — which, as noted by Śleszyński, PhD evokes associations with a block of ice — was picked up by Janina Rutkowska, a Sybirak.

Janina Rutkowska, née Jakudowicz, was born in 1940 in the property near Kiejdany in Kowienczyzna. Her father, a bank worker was arrested in 1945 and sentenced by the military tribunal, in Vilnius to 10 years of a labor camp and the fortune was taken away from the family. On May 1948 Janina’s mother with her four little children, as ‘enemies of the Soviet authorities’ were taken to Derbiniec sovkhoz . They returned to Poland in 1955.

Janina Rutkowska acted as a secretary of the Board of the Branch of the Sybiraks’ Association in Bialystok. She is also the founder of the Sybiraks Grandons’ Community (Wspólnota Wnuków Sybiraków).

Renata Frankowska, heading the General Władysław Anders Technical Vocational Complex in Bialystok, is a chemistry and physics teacher, a specialist in the field of oligofrenopedagogics, a guidance counselor, a librarian teacher. She is also the ambassador of Spring Education and an initiator of education changes. As she tells about herself, her aim is to create a school for the 21st century, relational and competence, in which a student is the most important and everyone trusts each other.

The third of the prepared statues was picked up by Krzysztof Koptyński, chairman of Deko-Bau company, which implemented the permanent exhibition of the Sybir Memorial Museum.

Krzysztof Koptyński is the chairman of the international company Deko-Bau, which was established in 2010, and deals with the production of theater and opera scenery, event decorations and interior design. Deco-Bau has prepared, among others, exhibitions at the museums such as: Hydropolis in Wrocław, the Emigration Museum in Gdynia, the Home Army Museum in Cracow or the Polish Song Museum in Opole.

The ceremony of giving the statues and commemoratives diplomas was concluded with the concert of classical music ‘In memoriam…’ devoted to the memory of Zbigniew Popielski, PhD, a Sybirak and well-deserved educator. The violinist, Jolanta Sosnowska and the organist, Dariusz Hajdukiewicz performed an amount of compositions, which relate to the music that Popielski, Prof., used to perform and listen to. Gathered people could hear the compositions by Jan Sebastian Bach, Gaetano Pugnani, Gisberta Steenwick or Zygmunt Noskowski.