Session of the Siberian Commission in the Sybir Memorial Museum

On Thursday, November 18, in the Sybir Memorial Museum, an away meeting of the so-called Siberian Commission was held, in other words the Commission for Research on the History of Sybir operating within the Committee on History of Science and Technology. This is the first such event in Bialystok. 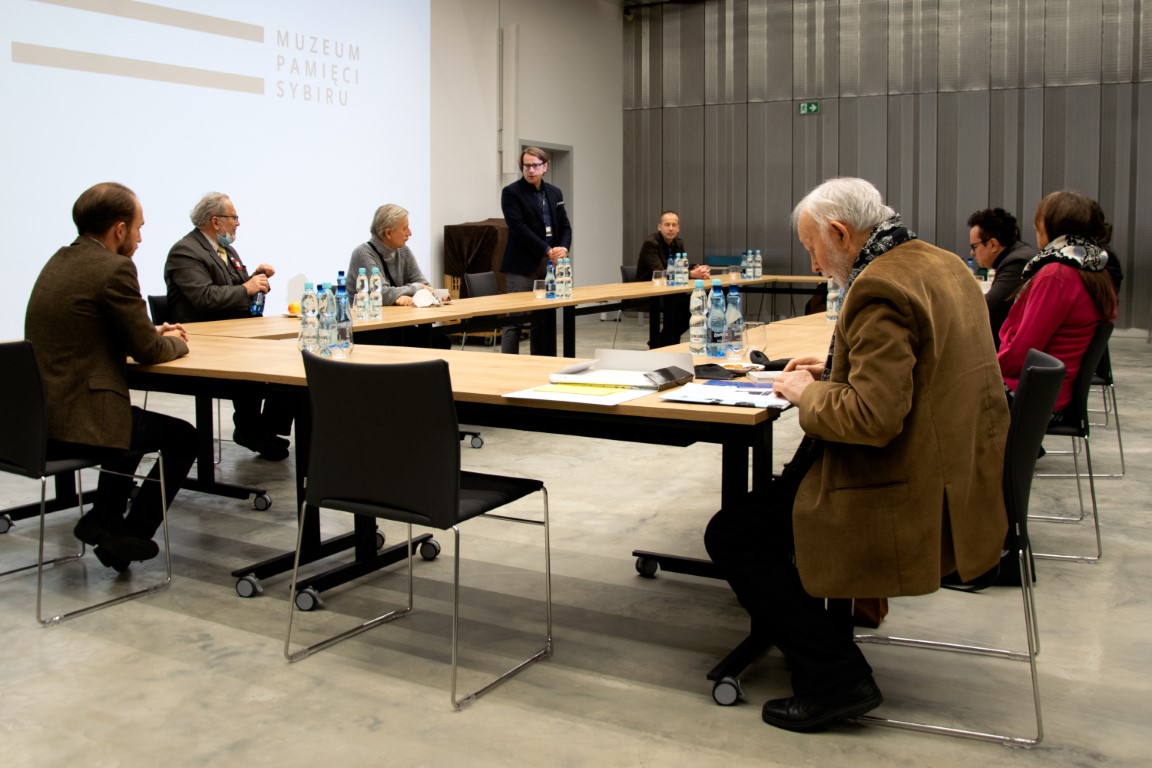 The participants of the meeting gave lectures on the current state of research, implementation of research projects and Polish initiatives in Siberia. They also presented the latest publications about Sybir. Sergiusz Leończyk, Prof., from the University of Humanities and Natural Sciences in Siedlce presented the activities of the Congress of Poles in Russia.

— I am the only true Sybirak in today’s group — the scientist began his speech. Privately, he is a grandson of a Polish voluntary settler who left for Siberia in 1913. Leończyk, Prof., author of publications such as Cmentarze polskie na Uralu i Syberii czy Polskie osadnictwo wiejskie na Syberii w drugiej połowie XIX i na początku XX wieku (Polish Cemeteries in the Urals and Siberia or Polish Rural Settlement in Siberia in the Second Half of the Nineteenth and Early Twentieth Centuries), conducted in 2012 come to Poland as a repatriate.

In his speech, he told, inter alia, about such initiatives as the website www.rodacynasyberii.pl, internet radio, magazines “Rodacy” (‘Countrymen’) and “Wiadomości Polskie”(‘Polish News’).

— People who look for their Polish family come to us, sometimes even from the time of the January Uprising — said Leończyk, Prof. — We hope to join efforts in this regard with the Sybir Memorial Museum.

Krzysztof Jabłonka, PhD, a historian and former consul of the Republic of Poland in Moscow, Kharkiv and Grodno, presented the film ‘Tunka’ made by Polish Television in co-production with the Institute of National Remembrance. He reports on an extremely interesting action of bringing to Poland a cottage, in which the young Józef Piłsudski most probably visited during his exile.

Piłsudski spent the years 1890-1892 in Tunka. From the letters sent to his beloved at the time, Leonarda Lewandowska, it is known that in Tunka he taught the sons of doctor Michalewicz, PhD. From the ‘investigation’ conducted by Jabłonka, PhD and the staff of the Museum of Lviv and the Eastern Borderlands, it appears that this Polish doctor lived in this hut with blue shutters.

The cottage was demolished and its historic part, from the 1860s, found its way to Poland after many adventures. After the reconstruction, it will be on display in the open-air museum of the Museum of Lviv and the Eastern Borderlands in Kuklówka near Radziejowice.

Piotr Głuszkowski, PhD, from the Institute of Russian Studies at the University of Warsaw, who has been associated with the Science Station of the Polish Academy of Sciences in Moscow since 2008, presented the Polish-Siberian Library, which has been financed by the Polish Institute in Moscow since 2016. Its website has recently been launched: www.bibliotekapolskosyberyjska.ptpn.poznan.pl

The researcher discussed a number of Polish and Russian-language publications published by the Library. — The dictionary of the Bar Confederates is based on sources available only in Russia. We hope that it will also be published in Polish — said Głuszkowski, PhD.

The scientist also drew attention to the need to interest young academics in the subject of Siberia. —We lack young people in the research on Siberia — he said. He also emphasized the role of Polish centers in the exchange of information on the state of research and publications of Russian scientists. — Researchers from various research centers in Russia often learn about the achievements of their colleagues from other Russian institutions only at conferences in Poland and in Polish libraries.

The meeting was chaired by Zbigniew Wójcik, Prof., secretary of the Commission Imam Mahmud Taha Żuk, also a researcher, involved in international cooperation of scientists from Poland and the countries of the former Soviet Union.

In his speech closing the meeting, he presented the memories of Stanisław Skłodowski — Maria’s relative, who voluntarily went deep into Russia in search of a better life. He was sent to the Łabiańska stanitsa and from there he moved to Tomsk, where, as a Pole and a nobleman, he was quickly accepted by the local Polish community. Imam Żuk talked about the image of Russia and Polish-Russian relations presented in the diary. — There were different Russians and different Russians —summed up the situations described by Skłodowski.

— We also have different biographies. What unites us is memory — summed up both his speech and the meeting of the Commission, Imam Żuk.

After the meeting, the members of the Committee visited the permanent exhibition of the Sybir Memorial Museum. They were very impressed: “This is a holy place. You work in a holy place!” — Imam Żuk kept repeating.