On Thursday, October 7, the team of Jagiellonia Bialystok visited the permanent exhibition of the Sybir Memorial Museum 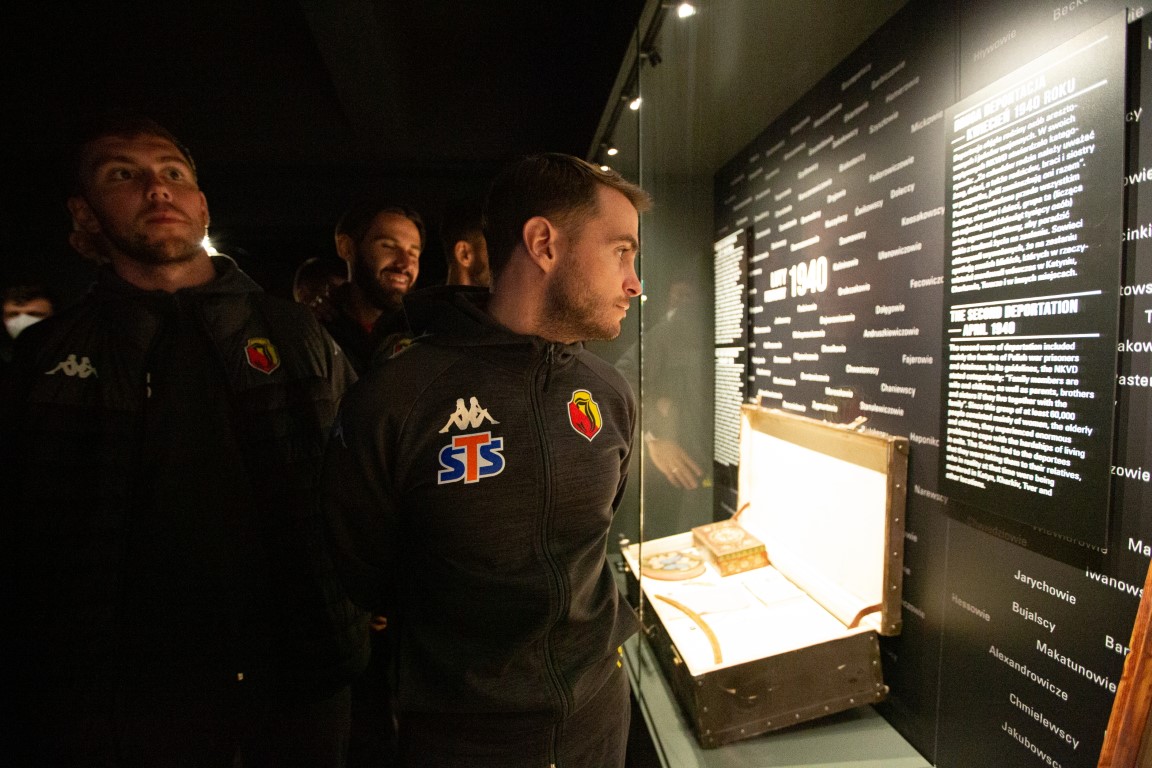 – Sport was an important element of pre-war life. Sports clubs were established very often by military units, such as the 42nd Infantry Regiment, closely related to the history of Jagiellonia – explained Marcin Zwolski, PhD from the Scientific Department of the Museum who showed around the exhibition.

The team was welcomed by the director of the Museum, Wojciech Śleszyński, PhD. – We are in a historical place, which today is one of the most modern museums in Poland – he emphasized. – Deportations during World War II are the experience of this part of Europe, from the Baltic countries to Eastern Europe – he said to the team of an international composition.

The brown leather ball from the mid-20th century, which can be seen in one of the first halls of the exhibition, attracted the attention of athletes. – The Sports Club of the 42nd Infantry Regiment that stationed in Białystok did not have any particular sports successes, but it is where Jagiellonia comes from, which is why we recently celebrated the centenary of the club – explained the Museum employee. The footballers were also interested in the Sokół 600RT M motorcycle produced in 1937. – For those times, it was a very modern construction – said Marcin Zwolski, PhD.

Visiting the exhibition was an opportunity for foreign footballers to get to know the Polish experience of the war better. – In Europe, everyone remembers that World War II was caused by Hitler. We emphasize at the Sybir Memorial Museum that it all began with a secret pact under which Stalin and Hitler divided the Polish lands among themselves.

The athletes went through the entire exhibition, listening to the stories about the experiences of people deported to Siberia and Kazakhstan. The room arranged for the interior of the cargo train car made a great impression on them. “Come on in, everyone” – the tour leader encouraged. – It is crowded, but there are about as many people here as there would be locked in such a car. Taken away in winter, they froze, in summer – they suffocated and died of dehydration. 25 people with their belongings, with everything they could take with them, traveled in such cramped conditions. – Six weeks, six weeks…! – surprised athletes whispered.

The Jagiellonia team listened with interest to the scientist who presented the realities of life of those who had to work on logging the taiga. Athletes, who care about proper diet and regeneration, were impressed by the information that hard-working Sybiraks received only 300 g of food per day. – It was equal to one slice of bread. Whoever did not work because he was sick or too old, received half – said Marcin Zwolski, PhD.

For years, those imprisoned in labor camps lived in extremely difficult conditions and malnutrition. – They slept no more than 5 hours a day – added the scientist.

The tour guide of the Jagiellonians made sure to mention the Western European victims of the Soviet system. Defender Israel Puero drew attention to the mention of his countrymen. — From among 200 Spanish airmen who came to the Soviet Union for flight training, several were arrested and sentenced to stay in a camp. Not all of them survived, because they were forced to hike through Siberia to a labor camp — said the Museum employee.

After the tour, the coach and the team captain shared his reflections. — The impression is not great, but enormous — said Ireneusz Mamrot. — When you read about it, it is tough. But when you have an opportunity, like here, to “soak it up”, the experience is downright traumatic. It helps you become aware of what people were going through. The conditions in which they had to survive the journey — and not everyone commuted to the place… Living conditions, nutritional doses, lack of sleep…

— It helps to appreciate every moment — commented Taras Romanczuk during his visit to the Sybir Memorial Museum. — We have everything today: food, gadgets, cars… And then you could get to Siberia with the whole family for nonsense. Ever since I become interested in this subject, I have appreciated the times we live in — he said. As he admitted, he is currently reading “The Gulag Archipelago” by Aleksander Solzhenitsyn.

The Captain of the Yellow–Reds recommends a visit to the Sybir Memorial Museum to all the fans and residents of Bialystok: – Everybody should come here!