Exhibit of the month: the Sobolewski family’s mementoes

As part of the “Exhibit of the month” series in July we present the mementoes of the long-term wandering of the Sobolewski family. 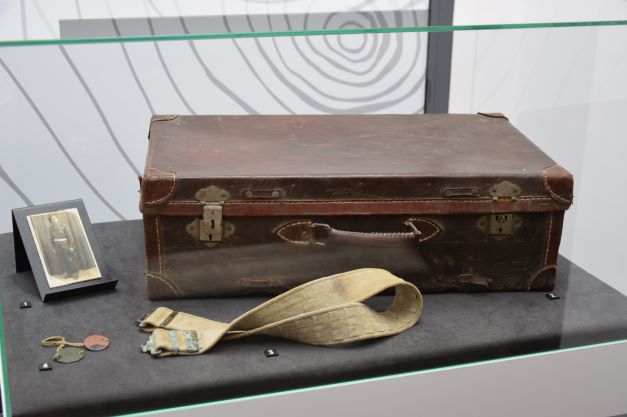 The Sobolewski family lived in the village of Krzyzyki near Czarna Bialostocka. The Soviets appeared in their family house in June 1941. They asked to take the most necessary things.

Alfons Sobolewski, his wife Stanisława and two little daughters and moreover his father and brother became the victims of the fourth mass deportation of the citizens of the Polish Republic deep into the Soviet Union.

After the Sikorski-Majski agreement was signed, Alfons Sobolewski together with his brother joined the Anders’ Army to walk the whole combat trail with her. Mrs. Stanisława also joined the army and after leaving the USSR with Anders’ Army, she ended up in a Polish camp in Africa. She met her husband again only two years later in England. The Sobolewski’s daughters died in the inhuman land.

The mementoes of the parents were given to our Museum by the son of Alfons and Stanisława, Mr. Wiesław Sobolewski. They include a dog tag and belt, which are part of the uniform of Mr. Wiesław’s father, and a suitcase bought by his mother in Kampala during the preparations for the trip to England. The exhibits are accompanied by a photo of Alfons Sobolewski in the uniform of the 3rd Carpathian Rifle Division.

Mr. Wiesław was born in Poland after his parents returned to their home country. However, he knew the fate of his family very well thanks to his mother’s accounts. — I decided to record my mother’s story in the 1980s — says Mr. Wiesław. — At that time, many Sybiraks were still accompanied by the daily fear of deportations. I remember that my mother kept telling me not to show these recordings to anyone, because maybe they would also take me away…

— It is a microhistory — explains Piotr Popławski, PhD, from the Sybir Memorial Museum, explains the idea of ​​the Exhibit of the Month. — We do not focus here on the fate of all deported Poles, we talk about them at the permanent exhibition, but on one family: how they survived the hell of Siberia, what fate befell them on their way back, who survived and who remained in the inhuman land forever.

— We try to honor Sybiraks who donate gifts to our museum and encourage other families to do so. There will always be a place for Sybiraks at the Sybir Memorial Museum — adds Popławski, PhD.

The mementoes of the Sobolewski family can be seen at the Sybir Memorial Museum until the end of July. You are welcome!