December exhibit of the month: memorabilia of the Jocz family

On Tuesday, the 6th of December, we presented the last exhibit of the month in 2022 – memorabilia of the Jocz family. There was a Christmas accent among them, because even in the ‘inhuman land’, far from their homeland, Poles tried to enjoy Christmas. 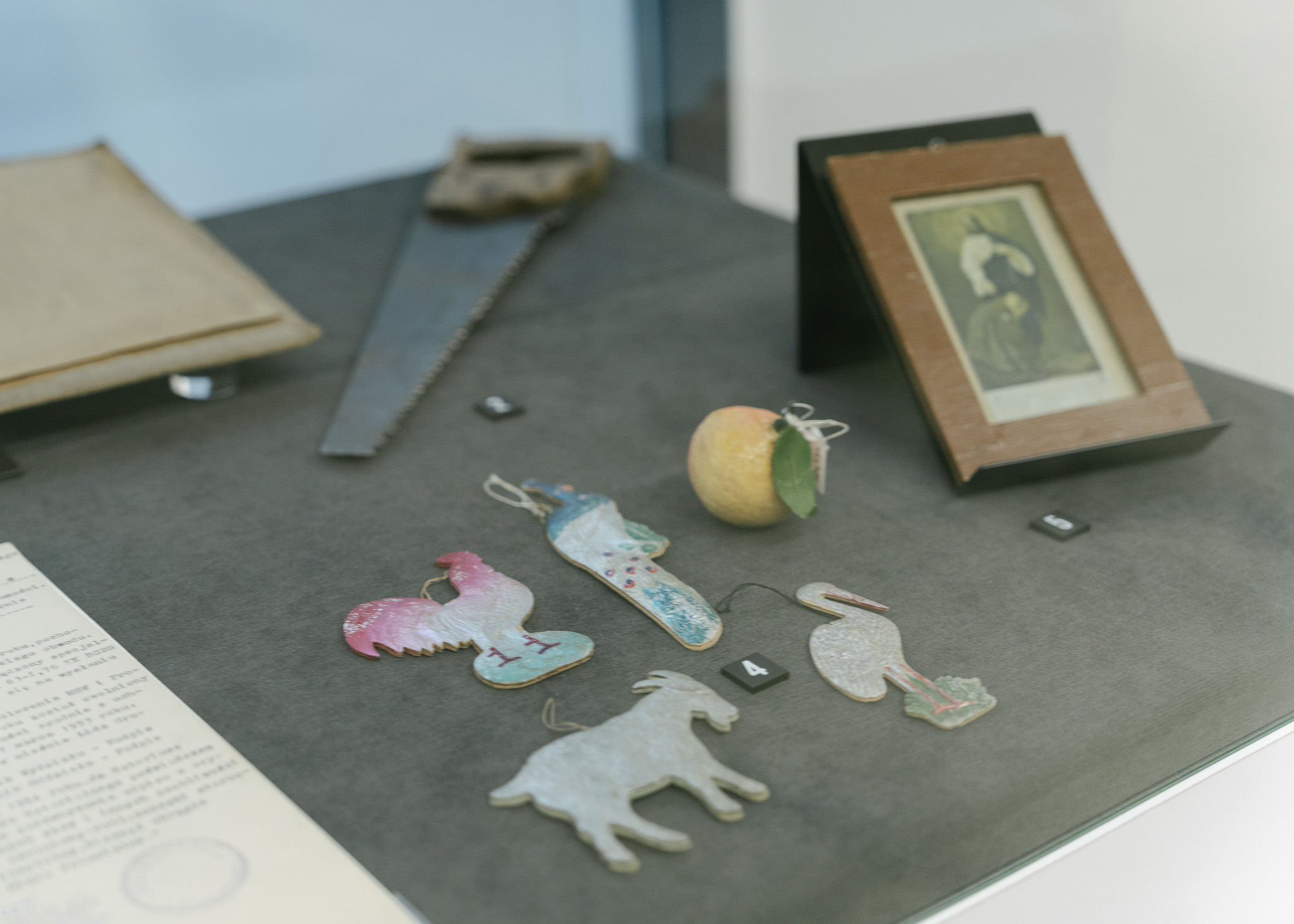 The “exhibit of the month” cycle presents unique items that were included in the collections of the Sybir Memorial Museum thanks to the generosity of Sybiraks and their families. In the December edition of the cycle we present items related to the history of the Jocz family. On Tuesday, December 6, Wojciech Jocz, son of Stanislaw, and his wife Barbara talked about them.

– My parents, Stanislaw and Bronislawa, lived in Surkonty, near Lida and Radun. It is western Belarus today, the Belarusian-Lithuanian borderland, but then Poland was there, Wojciech Jocz began his story. – They felt Polish. They lived in an area where most people considered themselves minor nobility. They grew up in this spirit, God and Homeland were very important. When the war came, my mother was 17 and my father was 18, he said.

In 1941 Stanislaw Jocz joined the ranks of the Home Army. – My father “was initiated”, that’s what he called it. He and his brother took the oath on the 2nd of May, 1942, said Wojciech Jocz. In July 1944 both of his relatives took part in Operation Ostra Brama. On the 29th of June, 1946, Stanislaw was arrested by the Soviets for belonging to the Home Army. – First, he was interrogated in Minsk for a year and three months, cruelly tortured. There is a room here in the Museum, exactly what my father told me about – a table, a lamp… He did not admit [that he was in the Home Army], which he was proud of until the end of his life. He has not betrayed anyone, his son told the audience gathered around.

Stanislaw Jocz was sentenced to five years in labor camps. The first stage of his sentence was in the Arkhangelsk region, where until 1949 he worked in forest clearing. From 1951 he lived in Bulanka in Krasnoyarsk Krai, also working as a forestry worker. He was to remain there for life.

– At that time, his wife, my mother-in-law, was struggling here with the Soviet power. When her husband was sentenced to eternal exile, she faced a dilemma – Barbara Jocz, daughter-in-law of Stanislaw and Bronislawa, joined the story. – There was an opportunity, as part of family reunification, to join her husband for this exile. She made the final decision to leave the freedom she had been in and go by train with her son. Knowing that she may not return to the land where she was born, or to Poland. For us as a family, this is an amazing example of fidelity to her husband, decency. We could then draw on these values ​​– she added.

In 1954 Stanislaw was released from prison and the Jocz family returned to Surkonty, then lived briefly in Lida. Four years later, in a process of repatriation, the Jocz family moved with their possessions to Poland. – They wanted to be close to the Polish-Belarusian border, but there was no such possibility, they were directed to Raciborz. There they took up work, and in 1960 they managed to buy a small house in Bialystok on credit and move here, continued Wojciech Jocz. – I am the only one in the family who was born in Poland, in Bialystok. The eldest brother was born in what is now Belarus and saw his father first time when he was 6 years old. The average of the three of us was conceived in Siberia, but was born after release, in Radun.

After presenting the history of their family, Barbara and Wojciech Jocz drew the attention of the people gathered to the exhibits in the display case. Mrs Jocz talked about the Christmas tree decorations bought in Siberia and brought from there: – They accompanied us at all holidays, my mother hung them on the Christmas tree. They were in such an honorable place in our home. We also had a habit of hanging two glass baubles at the very top of the Christmas tree – white and red. And this custom has survived to this day, our children and our grandchildren are also taught this.

In the display case, you can also see an album with photographs and a hand saw, with the help of which – according to the family’s account – Stanislaw Jocz built a house in Bulanka. – The picture we can see here was taken by my mother when she went to visit my father in 1952, and she and my elder brother were praying in front of this picture – added Mr Jocz, pointing to the picture with Christ. At the end of the meeting Wojciech Jocz mentioned his father, Stanislaw: – He was steadfast to the end, he never complained about illnesses, he was always brave, he remained faithful to God and Homeland. For patriotic ceremonies he wore the ‘Home Army’ armband and attended all celebrations. And that’s how he stayed in our memory – he said. – Mr and Mrs Jocz, by showing their memorabilia this month, represent their family, but also symbolize all our donors who give us exhibits – said at the end of the meeting the Director of the Sybir Memorial Museum, prof. Wojciech Sleszynski.

The December exhibit will be on display until the 23rd of December, and then from the 3rd till 9th of January (between the 24th of December and the 2nd of January the Museum will be closed due to a technical break). The next edition of the exhibit of the month – the 10th of January, 2023.