The tragic story of Tadeusz Jasiński − a heroic defender of Grodno, who was tied to a tank by the Soviets and died as a ‘human shield’ in September 1939 − happened in real! Thanks to a sensational discovery after 82 years, we found out how the boy looked like. 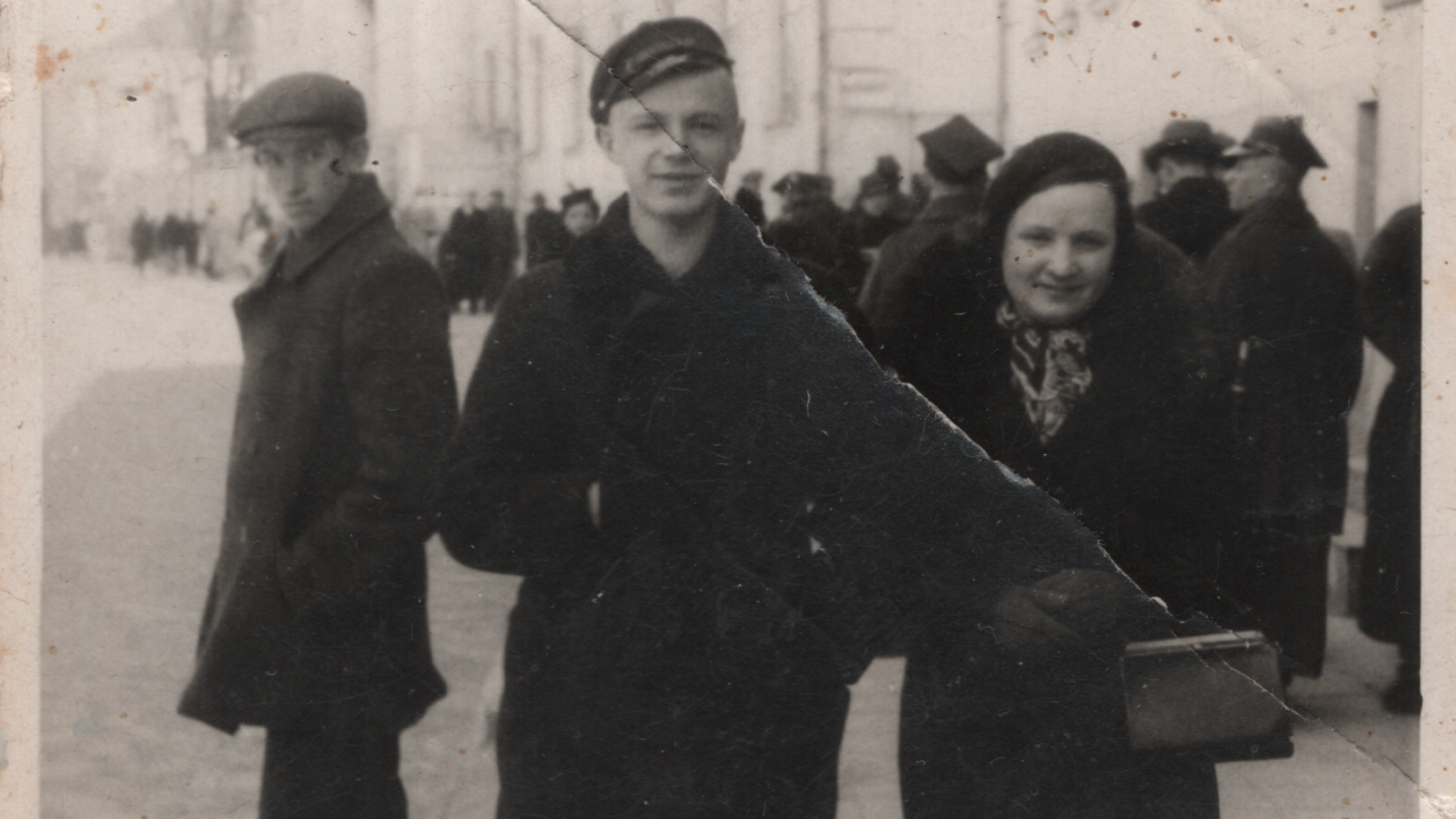 − I think that everyone, who is interested in defense of Grodno has heard about this character. Today the hero is already known. By presenting his history, we want to show how defense of Grodno really looked like − said prof. Wojciech Śleszyński, director of the Sybir Memorial Museum.

The fate of Tadeusz Jasiński, who became a symbol of civil defense of the Borderlands against the Soviet invasion, has so far been known only from Grażyna Lipińska’s memoirs. He was supposed to be one of the teenage fighters, who died while attacking Soviet tanks invading Grodno with petrol bottles. The existence of a boy with such a name and surname has been questioned more than once: he was not mentioned by other inhabitants of Grodno and the researchers describing his story relied entirely on Lipińska’s memoirs.

The Soviet aggression on September 17, 1939 was a shock for the authorities and citizens of the Second Polish Republic, who had been struggling with the German invasion for over two weeks. As most of the Polish armed forces were involved in the fight against Germany, to the defense of the country in the East − apart from the few backup units of the Polish Army and the units of the Border Protection Corps − also joined civilians: mostly youth and scouts.

The greatest military resistance of the civilian population to the Soviet invaders took place in Grodno. Apart from a small military garrison, schoolchildren and students, scouts, teachers and inhabitants of the surrounding villages reported on the call of the city authorities. They dug anti-tank ditches and barricades, prepared bottles with gasoline that were used to destroy tanks (so-called Molotov cocktails). During three days of fighting (September 20−22), the defenders inflicted heavy losses on the Soviets, calculated on at least 200 killed and wounded and over 20 destroyed tanks and armored cars. We do not know exactly the losses of the Polish side, but it is known that after capturing the city, the Soviets murdered about 300 officers and civilian defenders as well as ‘ordinary’ residents. The tragic episode of the battle of Grodno was the use of civilians, including children by the Red Army as ‘living shields’. They were tied to tanks going to attack. One of those, who died this way was a teenage boy, Tadeusz Jasiński.

Here is an excerpt from Grażyna Lipińska’s book “Jeśli zapomnę o nich…” (“If I forget about them…”), published in Paris in 1988 and then several times in Poland: “On the head of a tank there is a child, a boy. Blood from his wounds is guttering over the iron. Together with Danuta, we are starting to release the boy’s uncrossing arms bound with rags. I do not realize what is going on around me. A black tank operator is jumping out of the tank, he is holding a BAP in his hand and the second one, behind him is threatening us. With his fist raised in the Bolshevik gesture, with the scowl on his face, with a husky voice he is screaming, he is accusing us and the boy. For me, they are not existing, I can only see the eyes of the child full of fear and torment. And I see the unleashed arms reaching out to us with boundless confidence. Danka is lifting the child from the tank in one move and lying him on a stretcher. I am already at his head. We are grabbing the stretcher and, leaving the torturers speechless with our audacity, running towards the hospital. The boy has five wounds from rifle bullets (I know − Polish bullets are hitting enemy tanks) and a strong blood leak, but he is conscious. In the hospital he is surrounded by sisters, doctors and sick. − «I want mother», the child is asking. His name is Tadeusz Jasiński, he is 13 years old. He is the only child of Zofia Jasińska, a maid, he does not have a father, he is a foster child of the Charity Institution. He went into the battle, he threw a bottle of gasoline at the tank, but he did not light it up, he could not, he was unable to do it… They jumped out of the tank, they beat, wanted to kill, and then they tied him up at the front of the tank. Danka is bringing Tadeusz’s mother. Blood transfusion is not helping. The boy is getting weaker and weaker, he is dying. But he is dying in the arms of his mother and on a patch of free Poland, because the military hospital is still in our hands”.

Thanks to the memoirs of Grażyna Lipińska, Tadeusz Jasiński found a place in almost every book and article about the Polish defense against the Soviet aggression of September 1939. His name has been given to streets in several Polish cities, his symbolic grave has been created in Grodno, and Tadeusz Jasiński himself has been posthumously awarded the Commander’s Cross Order of Polonia Restituta. Nevertheless, people questioned Grażyna Lipińska’s testimony, noting that the hero’s personalities did not appear in any of the other known accounts about defense of Grodno. The dispute over the figure of Tadeusz Jasiński still raises strong emotions in Grodno itself.

− Information about the existence of mementoes of Tadeusz Jasiński reached us, that is the members of the ‘Grupa Wschód’ (‘East Group’) Association, over a few years ago. We began a tedious search. We really wanted to restore the character’s face − said Andrzej Bieluczyk.

We managed to find people, who looked after Zofia Jasińska, the boy’s mother, at the end of her life. They confirmed the existence of Tadeusz’s portrait. In 2021, one of the new members of the Association tied his own family story to the story of Tadeusz Jasiński. He heard about Zofia Jasińska, who had been a close friend of his relatives years ago. After the war, Zofia Jasińska came to Bialystok. She worked here as a cook. She remained lonely, remembering her son, who died during the war in Grodno until the end of her life. She did not like talking about his death. She even told people she trusted he had died throwing a bottle of gasoline on a German (!) tank. She emphasized, that her son was only 15 years old. In her apartment there was a portrait of Tadeusz, she also had another picture of him, as well as a handkerchief stained with his blood. In 1982, Zofia Jasińska died and was buried at the Parish Cemetery in Bialystok. The bloodied handkerchief was placed in the coffin by a relative of a member of the ‘Grupa Wschód’ (‘East Group’) Association, according to her will.

From the family caring for Zofia Jasińska, the members of the Association have obtained testimonials partially confirming these facts and permission to search for scattered souvenirs. During long-term work, postcards and photos dedicated to Zofia Jasińska, as well as two of her photos, have been found. A photo of Tadeusz Jasiński with his mother and his portrait − monidlo (a kind of realistic painting, a portrait usually painted on the basis of a photo) have also been found. These mementoes are kept in the Podlaskie Museum of Militaria in Bialystok run by the members of the Association.

The members of the Association, looking for a worthy place to display the hero, made contact with the Sybir Memorial Museum. The Museum’s researchers, together with the members of the Association, undertook research aimed at confirming the credibility of the find and explaining the discrepancy between the account of Zofia Jasińska’s guardians and the version of events described by an eyewitness − Grażyna Lipińska (the matter of death allegedly suffered in the fight against the Germans, not the Soviets, and the boy’s age of 15 instead of 13).

− Knowing that in 1939 the Germans did not reach Grodno, and the only fights between civilians and tanks in this area took place during defense of the city against the Soviet aggression, we came to the conclusion that the first discrepancy resulted from the fear of proclaiming a dangerous truth in communist Poland − said Marcin Zwolski, PhD, manager of the Scientific Department of the Museum.

Zofia Jasińska, who experienced a personal tragedy from the Soviets, must have been aware that the story of her son’s fight against the Red Army could have serious consequences for her. So she told a story in which there could be only one aggressor − German.

The second discrepancy was more doubtful. After all, it is difficult to assume that the mother mistook the age of her only son or deliberately overestimated it. A more likely mistake was Grażyna Lipińska’s, who, although she knew the boy personally, did not have to know his real age, or, writing her memoirs many years later, did not accurately recreate him from her memory. The problem was the lack of other possibilities of verification, because all those who mentioned Tadeusz Jasiński relied on Lipińska’s memories, duplicating her version about the 13-year-old hero.

− We have looked over the files of the investigation concerning the Soviet crimes committed in Grodno, conducted by the Prosecution Department of the Institute of National Remembrance in Bialystok. Among many testimonies of inhabitants of Grodno about anonymous boys, who died during the fights with Soviet tanks, there was one given in Szczecin in 2002 by a former student of a gymnasium in Grodno − said Zwolski, PhD. Describing defense of the city, he testified, inter alia: “During these fights a few Soviet tanks were destroyed, the wrecks of which I saw in the streets. I remember that in Orzeszkowa Street there was one of the tanks destroyed by my friend Jasiński, I do not remember his name. He was my friend from the street. He was 15 years old.” It should be noted that the testifying person was sure about the age of his colleague, as he was his peer − in 1939 he was also 15 years old.

During the verification of the find, it was possible to find Zofia Jasińska’s grave in the Farny Cemetery. It turned out that there was a memorial plaque on the grave telling about Tadeusz Jasiński. The family, that made the burial, did not install it. So far, its donor has not been identified.

The photograph of Zofia and Tadeusz Jasiński was deposited at the Sybir Memorial Museum. − The exhibition is almost finished, but we had no doubts that the hero, Tadeusz Jasiński, must be there − said Wojciech Śleszyński. The exposition of the photo required some changes to the already finished composition, but the symbolic importance of Jasiński for the history of defense of the Polish Borderlands against the Soviet aggression, and as a result − the great importance of the find presented today, made the management of the Museum have no doubt that this effort should be made .

− We should thank the Association for the fact that the mementoes of Tadeusz Jasiński remained in Bialystok − said Rafał Rudnicki, the deputy mayor of Bialystok. − Other institutions in Poland also wanted to have these exhibits in their collections. And they are with us. It is a great honor.

The members of the Association decided to make the reproductions of the other mementoes of Zofia and Tadeusz Jasiński available in a free domain on the Internet so that anyone interested could have access to them. At the same time, Adam Bieluczyk and Rafał Rudnicki appealed to schools and local authorities to become interested in the figure of the heroic teenager. − Jasiński already has its streets and squares, but he does not yet have a school named after him − reminded Bieluczyk.